Port has its origins in the Douro region in Portugal. 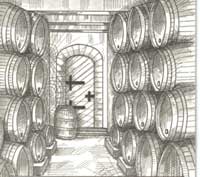 The British and Portuguese governments came to an agreement in 1654 granting British traders special trade status.
In 1678 two English traders, while on holiday along the Douro river, discovered an interesting wine, named Pinhao. After finding that the wine had been fortified with brandy, they decided to buy the stock and add more brandy before shipping it to England. The English adored this new wine and in the middle of the eighteenth century Port was born …

South African Ports have a history dating back to the early nineteenth century when production was started on the country’s own Port-style wines. Because of the English love for Port, sales showed a dramatic increase during the first half of the twentieth century. Sales declined during the late 1960s and 70s, and although attempts were made to improve the standards of local Ports by planting cultivars such as Tinta Barocca, Souzao and Cinsaut, unfortunately these were still made in a very sweet style. During the late 1980s and early 90s more producers began to concentrate on the production of quality Port. Today Port is gaining popularity and a wide spectrum of Ports is made in South Africa, which lately are becoming less sweet – although Ports are never quite dry. This swing to the drier style indicates the commitment of the South African Port Producers’ Association to the improvement of local Ports. Good Ports are much sought after and at recent wine auctions, including the Nederburg Auction, Port fetched more than double that of other fortified wines.

THE PRODUCTION OF PORT

The best Ports are made from blends and include cultivars such as Touriga Nacional, Touriga Francesa, Tinta Barocca, Tinta Roriz, Cornifesto and Souzao. Port grapes are harvested at full maturity and are crushed by mechanical means. Fermentation takes place in either traditional open casks or in modern, closed, stainless steel fermenters.

As with red wines, the skins tend to rise during fermentation and the ‘cap’ so formed has to be punched down or the wine pumped over to get colour and flavour extraction. Once the correct sugar level has been achieved through fermentation the wine is then fortified with the finest brandy spirit. The Port is then aged in wood, the period of maturation depending on the type of Port being produced.

Some like the Vintage Ports mature in large vats while Tawny Ports on the other hand, are matured in small 500-litre “pipes” before they are bottled.

Before the formation of the South African Port Producers’ Association (SAPPA) no attempt had been made to lay down guidelines for the different Port styles. Each producer had his own ideas and labelling was often confusing, not stipulating to the customer what to expect when opening and enjoying a luscious South African Port. SAPPA has tried to rectify this problem by setting guidelines to help the consumers find their way through the maze of Port wines and recommends the use of the word “Cape” to identify South African Ports. The SAPPA stamp of approval on a Port ensures that it adheres to certain standards as identified by the Association: