THE MYSTERIOUS ELEPHANTS OF KNYSNA

existence is held today by a slender thread.

In the late 1990s, the Knysna elephants had even been described as a “functionally extinct population,” as it was thought that only one elephant was still surviving, an elderly cow. This was, it was thought, the very end for the elephants of the southern Cape. It was a dismal and very sad situation.

But, as I was to learn as I covered hundreds of kilometres on foot for over the past year and a half, through forest, fynbos mountainsides, and through plantations, I discovered that the elderly cow elephant was not the last Knysna elephant. There were others out there, other elephant survivors that nobody knew anything about. And it is my feeling there could even be other elephants that no one knows about. The elephants of Knysna are elephants of inspiration.

HISTORICAL BACKGROUND ON THE ELEPHANTS OF THE SOUTHERN CAPE

The San people, the original human inhabitants of the southern Cape, were the very first chroniclers of the existence of these elephants. The San frequently depicted elephant in their rock art. In fact, elephants were depicted more often in the San rock art of the Western Cape than anywhere else in Southern Africa. Elephants were important animals in San mythology and religion. Today we do not know fully what was the spiritual and religious relationship between the San and the elephant.

But, it is very likely that the elephant was seen as a “power animal” from whom, when in trance state, San shamans could draw power. 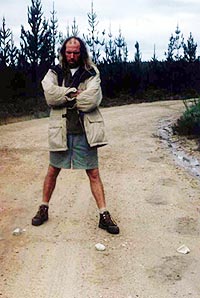 Prior to the arrival of the European settlers, and then the advancing ivory hunters and sportsmen, it has been suggested that over 100,000 could have existed in what is today, South Africa. The growth in the ivory trade between 1790 and 1890 was to result in the elimination of the elephants that once, seemingly timelessly, roamed this southern part of Africa.

By about 1910 the Knysna elephants, those of the Addo district, and a relic population in northern Kwa-Zulu Natal represented practically the only surviving elephants in the entire country. At that time, in what is today the Kruger National Park, perhaps a dozen elephants existed.

THE DECLINE OF THE KNYSNA ELEPHANT 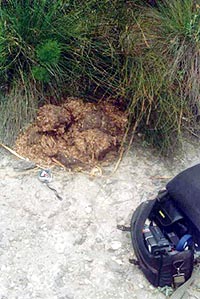 It was thought in 1870 that perhaps 400-600 elephants were existing in the narrow 200 kilometer long coastal belt between the Outeniqua/Tsitsikamma Mountains and the shores of the Indian Ocean. At the centre of this belt of land are the main forests of Knysna.

Though accuracy of the elephants numbers was, and still is, very difficult, the following records estimate the Knysna elephant numbers over the past century.

In 1944 it was thought that nine elephants were existing. In a year long study between 1969 and 1970, former game warden, Nick Carter, revealed the existence of eleven elephants.

In 1980 the Department of Forestry announced that only two elephants, a cow and a calf could be located in the Knysna forests. In 1989 it was announced that a calf had been born. But who was the father?

INTRODUCTION OF THREE YOUNG KRUGER ELEPHANTS INTO THE KNYSNA FORESTS - 1994

In a bold experiment three young elephants were introduced into the forest. Sadly one died, while the other two, very interestingly,chose not the forests to make their home, but spent the majority of the next five years in fynbos country on the foothills of the Outeniqua Mountains. This is interesting as my research has revealed that the present-day Knysna elephants are not, as previously thought restricted to forest habitat, but also commonly utilize the fynbos areas, as the Kruger youngsters had done. My work shows that the Knysna elephants are elephants of forest and fynbos. In fact, of all the droppings found by myself in almost a year and a half, two thirds were found outside the forests. This has important implications when considering the future conservation of the Knysna elephants. 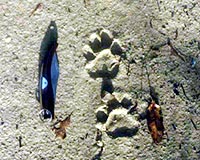 Some months after the arrival of the Kruger youngsters, an intensive search was undertaken to determine the status of the original Knysna elephants. Only one elephant was found, the cow estimated to be approximately 45 years old. This elephant became known as the Matriarch.

Because the two Kruger youngsters did not team up with the (thought to be) lone cow, the Matriarch, or stayed within the forest they were recaptured and moved to the Shamwari Game Reserve in the Eastern Cape. Today they live amongst a family herd of other elephants.

… This article will be updated as more information becomes available.