In earlier years, when all transport was leisurely and road surfaces shocking, many South African farmers had a townhouse (dorpshuis) in the nearest settlement. This made overnight and even longer stays feasible especially their attendance at the quarterly Communion Service (Nagmaal-diens) and other special occasions. This custom still exists today, but on a much smaller scale.

These townhouses were meant to be purely functional. Thus their construction was simple and unadorned. The Le Roux Townhouse which now forms part of the C.P. Nel Museum-complex was markedly different from other such buildings. The house was built in 1909, when Oudtshoorn was in the midst of the second Ostrich Feather Boom (1900 -1914). Money being no object, the brief for this Townhouse was that it be designed by one of Oudtshoorn’s best-known architects, with the most modern innovations, and built with the best of imported and local materials.

Because of its gracious opulence, it stood head and shoulders above the ordinary townhouse, several of which are still to be seen in the area north of the Church, i.e. Camp and Loop Streets.

Since 1863 Oudtshoorn had become known world-wide for the development of the Ostrich Feather Industry. However, the years 1900 – 1914 should be regarded as the zenith of this period of development. Feather trimming became “de rigueur” for Ladies’ High-Fashion apparel, especially in Britain and Europe. 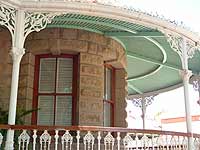 Choice feathers fetched unbelievable prices, which in turn brought unaccustomed wealth to both farmer and merchant.
This was augmented by the concurrent expansion of the Tobacco Industry, and soon began the rivalry between farmer and merchant to see who could build the more beautiful “Feather Palace” or luxury home.

The owner of Townhouse, Johannes Hendrik Josephus le Roux (6.1.1871 to 28.9.1947), was the sixth generation from the founder, Gabriel le Roux, who together with his older brother, Jean, fled from Blois in France with the French Huguenots to the Cape in 1688. Johannes – or “John Plan”, as he was known, grew up at Rooiheuwel, the farm of his parents Hendrik Johannes Josephus and Sarah Hester Johanna le Roux. After his marriage to Adie (Adriana Catharina, nee 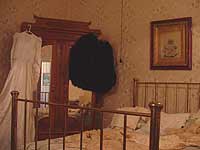 The couple had four children, viz. Rosina (Rose) Elizabeth, born 22.7.1898, Maria Magdalena born 15.1.1900 with her twin sister Beattie (who died aged 14 months); and a son, Johannes Hendrik Josephus born 6.1.1904. The Le Roux couple frequently offered hospitality to the famous and even Royalty, amongst others, Princess Alice and the Duke of Connaught (the Earl and Countess of Athlone) and Princess Beatrice in 1923; the then Prince of Wales, in 1925; Prince George, Duke of Kent (killed in an aircrash during World War II); Cecil John Rhodes; the writer H. Ryder Haggard, and others.

He won several medals for the outstanding quality of his ostrich feathers exhibited at Cape and London Shows, as also trophies and other prizes for his imported cattle.

HISTORY OF THE SITE AND HOUSE

John le Roux bought stand No. 6488 in the High Street in 1907, which purchase included the so-called “Pioneer House”, fronting onto Loop Street. Originally this site was part of the larger property given to the N.G. Church by J.C. Schoeman and the founder of Oudtshoorn, C.P. Rademeyer, when Oudtshoorn became a magisterial District in 1858. In order to augment Church funds, once the Church building had been completed, some of the above-mentioned gift was cut into smaller portions in 1879 and sold. A Mr O’Flinn Morkel bought the “Townhouse” site, with the intention of erecting a shop, which evolved, in the course of time and much renovation, into what today is known as the “Pioneer House”. 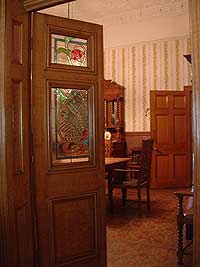 After Morkel it passed through the hands of seven owners before being acquired by Le Roux, In 1908 the well-known Oudtshoorn architect, Charles Bullock, designed the present “Townhouse” for John le Roux. Building operations by Coe & Bolton Contractors started in 19O9 and was completed in 191O. An interesting aside is that in 1905 Bullock also designed the one-time Boys’ High School, now the C.P. Nel Museum.

During the great Spanish “Flu epidemic of 1918 a Dr. J.A. Raubenheimer hired rooms in Le Roux’s “Pioneer House” as a temporary hospital for his patients, as his Private Hospital on the opposite corner of Loop Street was overflowing. One of the best-known couturiers of South Africa, Sarie Marshall, hired the “Pioneer House” from 1946 to 1952 from Le Roux to establish her business: “Sarie se Naaldwerkdiens / Sarie’s Sewing Service”. She later gained world-wide prominence with her ostrich-feather trimmed wedding gowns.

The three Le Roux offspring were the co- heirs of the house on the death of “John Plan” on 28.9.1947, each one having his/her own room. The son, Johan’s and his wife Lucia’s four children were all born in the front bedroom, as well as Rose’s only daughter, Ada. In 1961, after the death of her husband, Rose (van Niekerk) bought the house from her brother and sister and lived there until her death in 1977.

THE ARCHITECTURE OF THE TOWNHOUSE

Contrary to modern custom, the house is aligned to the street, without taking cognizance of the sun. Being a corner house, its architecture is the more striking. Although Art Nouveau, (the French term for the artistic style of the period 1895 – 1905), is the over-riding impression one gains of the structure, on analysis the architecture is really eclectic – altogether in keeping with this period of wealth and prosperity, as architects could “mix and match” different styles and building methods regardless of cost. This resulted in an architecture well suited and peculiar to the Little Karoo. 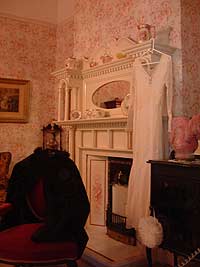 The thick sandstone walls (built with dressed stone from the nearby quarries), the verandahs that almost encircled the house, the high ceilings and the large sash windows with their heavy wooden shutters were sufficient protection against Oudtshoorn’s climatic extremes. The corrugated- iron verandahs, decorated with gleaming white cast-iron lace-work brackets and railings, also all the iron-work of the portico, boundry-wall railings and the peak of the tower, contrast beautifully with the raw sandstone walls and red roof.

The rectangular jut of the tower room on the south-western corner and the triangular bay windows of the other two corners are typically Regency, whilst the asymmetry of the whole layout is more a Rococco element. This playing with styles created great complexity for the roof construction, which impression is underscored by the octagonal convex roof cladding of the tower.

Colourful stained glass panels of Art Nouveau-type with flowers and orientally inspired butterfly-wings, are incorporated in the front door, passage door and passage window. Copper instead of the more common lead adds to the overall impression of luxury. The ceilings, cornices and dados of the reception rooms are of embossed papier-mache. All the external woodwork is of imported Burmese teak, while the inner doors and frames are artistically “grained” to resemble oak. The fire-places and bathroom-basin support are of imported cast-iron. The Art Nouveau influence is noticable in the electric-lamp shades and the glazed tiles of the dining-room fireplace and the bathroom.

This dwelling was one of the first houses in Oudtshoorn that could boast with an indoor bathroom and toilet. It was also one of the first to be supplied with electricity. The oilcloth coverings on the pantry shelves, the wall-paper of the master bedroom and the cotton and lace window-shades are original, dating from 1909, as are the carpets in the master bedroom and sitting-room and the linoleum of the rest of the house with the exception of the kitchen and bathroom.

In June 1979 the Board of Trustees of the C.P. Nel Museum bought the Townhouse from Rose’s sole heir, Ada, and after costly restoration opened it as a Townhouse Museum. Furniture has been judiciously bought during this period to approximate the original furnishings which have remained in possession of the family.

On the 22nd February 1980 the house was declared a National Monument.

Source: Extracted from the Official leaflet which was compiled by: A.Holtzhausen