REMOVING TORTOISES FROM THE ROAD

The issue regarding people picking tortoises up from roads and taking them home, is an age-old one, because of what I call, the “ag-shame”-factor. Tortoises and chameleons unfortunately have this “thing” about them that people always want to “take care” of them, doing more harm than good in reality. 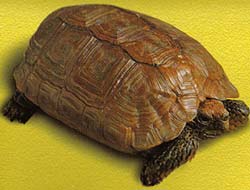 I firmly believe the main reason why people, while speeding along the N1 from Cape Town to Johannesburg or vice versa, would stop and pick up tortoises on the road (which haven’t been run over yet!), is exactly because they think: Ag, shame, look at the poor, lonely tortoise! He must be lost and we must save him.

Therefore, we stop and pick the tortoise up and then: Oh, daddy, can we take the poor tortoise home, pleeeez? He looks so sad and lonely! Ag ja jong, bring the tortoise, we’ll take him home and give him a good home. Not long after this, Tortoise starts looking ill and thin (having been on a lettuce diet for two weeks, because we heard that this is what tortoises love), so we decide that the best thing for it is to get it back in nature, so we take Tortoise to the closest piece of veld and release him, and say proudly to our friends: Look, we have done our bit for conservation!!

In the meantime, Tortoise, who grew up in the Karoo, now finds himself in the bushveld or grassland and can’t find anything to eat really (there’s just grass around and no lekker succulent bossies to chew on!), gets sicker and sicker, gets a runny nose because he is stressed out of his shell, meets another tortoise, transfers the runny nose syndrome virus to his new friend and eventually slowly starves to death.

Meanwhile, runny nose syndrome spreads like wildfire in the otherwise healthy local population, and before long, Gauteng nature conservators are confronted with serious losses in the local tortoise population.

Okay, if you’ve read this far, pardon me, I tend to get carried away a bit sometimes!!

Seriously though, this is just a popular version of exactly what happens when people pick these animals up along the roads and take them home. What they don’t realise is that wild animals need special attention if and when you want to place them in captivity, and because not many people know how to care for animals such as tortoises, the animals are usually at the short end of the stick.

REASONS WHY YOU SHOULD NOT PICK UP TORTOISES

There are 4 main reasons why people should not pick tortoises up along our roads:

I guess I could go on and on, but these are as far as I am concerned the main reasons why people should not pick up tortoises along any road, and certainly avoid running them over, unlike some road users who would deliberately run them over!

A final reason why one should not put animals such as tortoises which have been in captivity for a long time, back into nature is among other the fact that it has become used to a regular source of food, water and shelter, and once back in nature, it would find it very difficult to cope with the harsh reality of less food, very little water (if any), predators, etc. One is actually signing its death warrant!