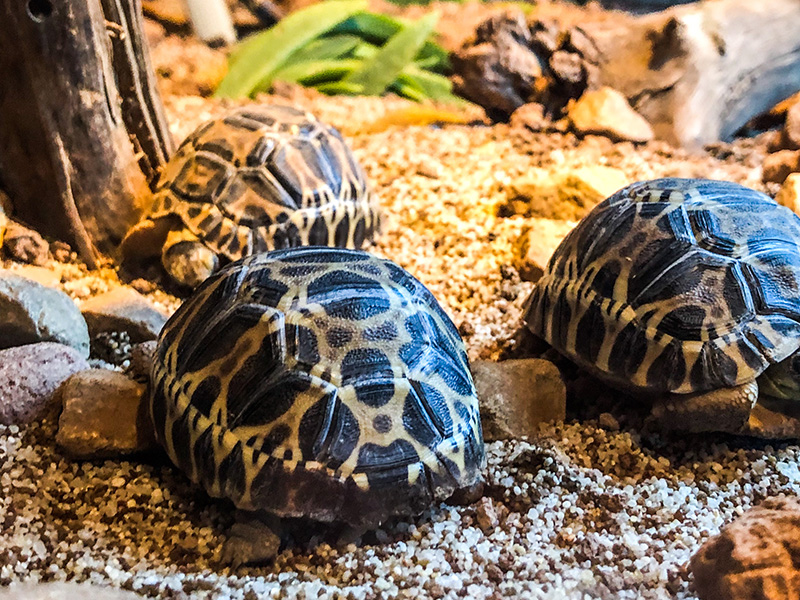 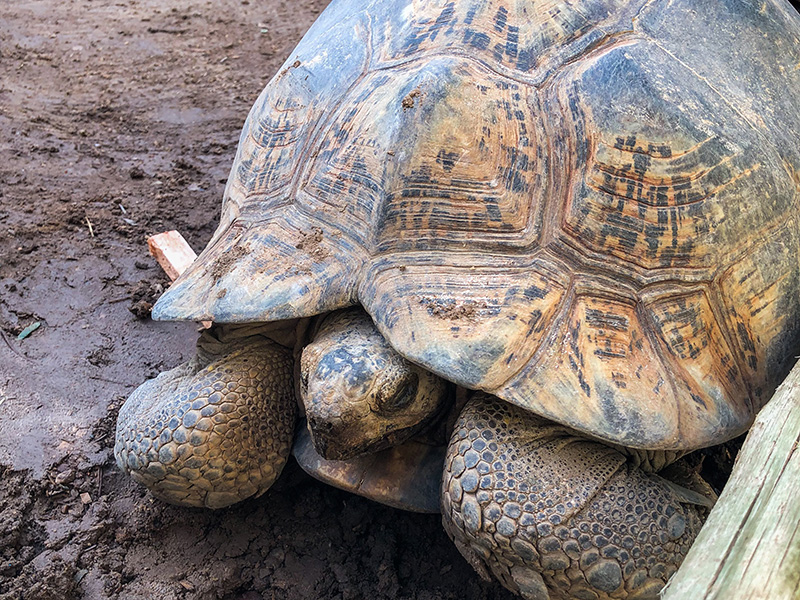 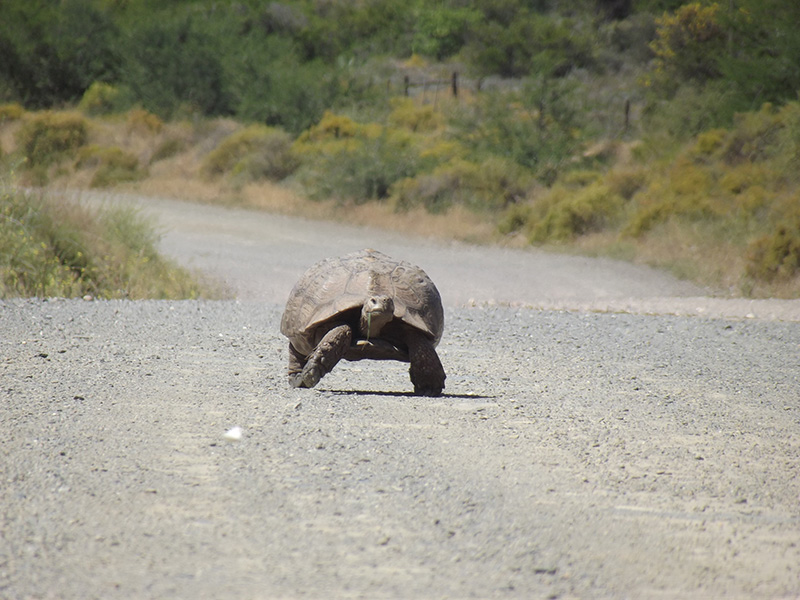 Nature has endowed the angulate tortoise with a sturdy throat shield which it uses both in combat and self- defence. The shield, or ‘bowsprit’, projects at the front of the under shell, and is used in much the same way as a battering ram – to dislodge and overpower rivals. This bowsprit, combined with the relatively small opening of the carapace in front, also protects the angulate tortoise’s head when it is withdrawn.

During territorial or mating skirmishes, a duelling male angulate tortoise achieves ultimate success when he manages to tip a male rival over onto his back. This is an undignified position for any tortoise though not a permanent one, for with some agitated thrashing of his four legs and with a rocking motion of his body, the creature is eventually able to right himself.

Although angulate tortoises are vegetarians – being particularly partial to young beans in captivity – they are thought to supplement their diet in the wild by feeding occasionally on carrion. They will certainly not refuse meat in captivity.

The female lays a single, oval egg at a time, burying it in a 10 cm-deep hole burrowed in a sandy and well- drained locality. She repeats the process regularly over the course of several weeks. The incubation period varies from three to seven months.

Size: Length (m) 10cm, (f) 11,5cm.
Colour: Each shield of the carapace is olive-green or yellowish green, with a reddish brown centre and a narrow dark brown or black border. Sometimes the carapace of adult males shades to an almost uniform orange-brown.
Habitat: From coastal fynbos to drier grassy habitats.

This tiny tortoise has earned its name, padloper – road-walker: it has a habit of taking to the road when it goes for a stroll – oblivious of the fact that by doing so it dices with death. Fortunately, the species is not so rare that its wanderings into the highways and byways will lead to its extinction; in fact it is relatively common in the southern coastal areas of the Cape Province.

The upper jaw of the Cape padloper ends in a hooked beak, especially noticeable in males, and rather like a parrot’s – hence one of its alternative names: parrot-beaked tortoise. The beak is used for foraging and fighting. Another name, ‘areolated tortoise’, refers to the distinctive patterning of the shields, which form three rows of ‘areolas’ or greenish circles on the carapace.

Finally, the generic name Homopus derives from the Greek for ‘same-footed’, a reference to the fact that the tortoise has four claws on each of its four feet � unlike nearly all tortoises, which have five claws on the front feet and four on the back feet.

The Cape padloper gives no trouble to farmers or home gardeners, for it feeds almost exclusively on indigenous vegetation. Two to four hard-shelled oval eggs are laid by the female at intervals during her reproductive period. The eggs, buried and covered over in the usual tortoise way, take about five to seven months to incubate.

Size: Length 22-32cm.
Colour: The carapace (uppershett) varies from greyish brown to olive-brown or blackish, while the plastron (under-shell) can be blackish or more usually has symmetrical yellow and reddish or dark brown markings. In young specimens the outer edge of the carapace is marked with yellow.
Habitat: In or near ponds and vleis throughout southern Africa, even if this water is only seasonal.

Although the helmeted, or Cape, terrapin is a strong swimmer and very much at home in the water, you will often see it on terra firma. It enjoys basking on a mud bank, and can travel across land at quite a brisk pace. It reacts to danger in such circumstances by emitting an offensive odour from stink glands on the flanks at the base of each leg; the smell is, quite literally, enough to frighten horses, which are said to associate it with the smell of lions.

This species is omnivorous. Its catholic diet includes such aquatic fauna as frogs and tadpoles, crabs and fish. It may also make a meal of a duckling or other small water-bird, seizing its prey by a leg and dragging it underwater to drown it. With the sharp claws of its forelegs it can rip the victim apart.

Like sea turtles, female helmeted terrapins come ashore to excavate a hole in which to lay their eggs. To soften the hard soil the female urinates copiously, and ‘bulldozes’ the resultant mud into a nest with the front of her plastron or undershell. Her oval eggs – usually 20-25 in a clutch – have soft shells that later harden. The clutch is covered over with mud and other debris, and it takes about three months for the hatchlings to emerge.

The Afrikaans name for this little creature – ‘donderweerskilpad’or’thundery weather tortoise’ is one of several others on the same theme: onweerskilpad, reenskilpad, swaarweerskilpad. The allusion in each case is to a belief in the Karoo, the sole habitat of the species – that this secretive tortoise is usually seen only shortly before a thunderstorm, when it emerges from its shelter and briskly takes a walk in the open veld. It is welcomed as a forecaster of rain.

The Karoo padloper is one of five diminutive tortoises belonging to the genus Homopus, four of which are virtually restricted to the Cape Province. Despite the generic name, derived from Greek and indicating that there are the same number of claws (four) on all four feet, the Karoo species has the more normal tortoise complement of five claws on the front feet and four on the rear ones. It feeds on succulent Karoo plants and their flowers, and as it forages moves relatively rapidly over the ground.

The tortoise’s carapace is flattened and not high-domed, which equips it well to wedge itself under rocks for protection as well as to make progress over stony terrain without overbalancing and ‘turning turtle’ though if it is unlucky enough to do just this, it manages to get back on all fours.

The species is seldom found far from some rocky outcrop where it will seek shelter beneath an overhang rather than in a bush. Its enemies include predatory birds such as crows, which easily crush the relatively soft carapace.

The female deposits one to three eggs in a hole which she then covers over with soil. Incubation may take from five to seven months.

The mountain, or leopard, tortoise is the most widely distributed and also the biggest of the 12 species of land tortoise found in southern Africa. It is believed to take its name ‘mountain’ tortoise from its size rather than its habitat. (‘Leopard’ tortoise comes from the black and yellow blotched patterns on its high-domed carapace.)

Though not averse to gnawing on an old bone, the mountain tortoise is mostly vegetarian, feeding on a variety of plant matter, including grass shoots, succulents such as cotyledons, fungi and fruit.

When mating time approaches in spring, males become increasingly aggressive in competing for the favours of a female; two rivals will butt each other until the loser is overturned.

As with other tortoise species, the female lays her 5-20 hard-shelled eggs in a hole she has dug; then she fills it in and, in a clumsy but effective stamping manoeuvre with her hindlegs, flattens the soil all around. The incubation period varies from 8-14 months.

Not only are the eggs at risk from ants and other insects, but also from such predators as rats, jackals, meerkats and mongooses. The hatchlings provide a delicacy for many small and medium-sized carnivores and a host of birds.

Adults usually weigh from 10-15 kg, but some specimens of over 40 kg have been recorded in the Eastern Cape.

Size: Length (m) 10cm, (f) 13,5cm.
Colour: Carapace dark brown or black, with a pattern of yellow or orange stripes radiating from the centre of each domed shield making up the carapace.
Habitat: Dry, semi-desert regions.

The tent tortoise has a beautiful geometric pattern of’ Bedouin tents’ on its upper shell, and this is appropriate, for it is quite at home in the semi-desert the sparse conditions of Namibia, Namaqualand, Bushmanland and the Karoo.

Unfortunately in the past, this species and its close cousin, the geometric tortoise, have been sought and sold by pet traders, with the resultant loss of large numbers from their natural habitat. It is doubtful if many specimens survived in captivity for long: they depend on a very specialised diet including assorted Karoo bushes, mesem-bryanthemums and other South African succulents. In addition, their desert-adapted constitutions are not suited to moister climates and they tend to succumb to lung, nasal and eye infections when removed from the dry interior of southern Africa.

The colouring and size of this little tortoise vary greatly, particularly from one area to another but also within a single ‘population’. Three subspecies are recognised by biologists. Of these, Psammobates tentorius trimeni, found on the Namaqualand coast, boasts the boldest markings, the brightest colours and well-developed’tents’. Subspecies verroxii, found in the driest parts of the Karoo, has underdeveloped ‘tents’, while subspecies tentorius, from the Eastern Cape, has the best-developed ‘tents’ of all.

The female tent tortoise lays a clutch of one to three eggs, and buries them in the sand as all other tortoises do. The young emerge in late summer or early autumn.